I was inspired to make these after a friend, and fellow belly dance troupe member, brought some her husband made for a pre-show costuming session. (Best husband ever, right?)

These were what I like to call “Oh Wow” treats. The kind of treats you bring into work, set on the designated “treats” counter, and watch as coworkers pass by and eye them up.

Eventually they’ll cave, the mid-morning/mid-afternoon urge to snack kicks in while they’re sipping some coffee and thinking about their next meeting or reminding themselves to remember to email so-and-so back.

They absent-mindedly grab one while waiting for the microwave to heat their lunch, not expecting the flavor explosion that is about to pounce until….”Oh wow…these are really good. Who made these?” 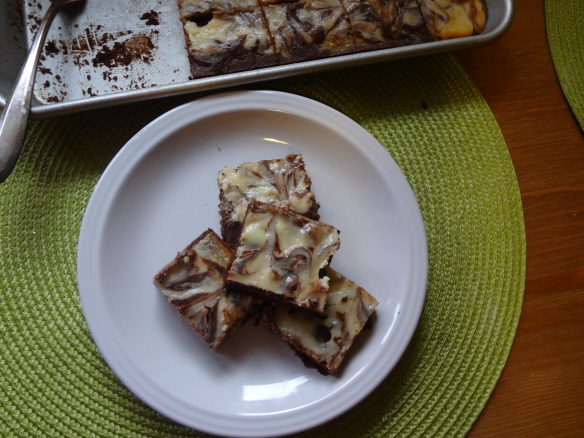 2. For the brownies – Heat butter and chocolate in a medium-sized saucepan over medium-low heat, whisking occasionally, just until melted. Remove from heat and whisk for a minute or so, until slightly cooled. Using an electric mixer, stir in the sugar, eggs, and vanilla until well combined. Mix in the flour until just combined and spread in baking pan.

2. Using an electric mixer, beat together the cream cheese, egg yolk, sugar, and vanilla in a small bowl until smooth. Dollop the cheesecake mixture over brownie batter, then swirl in with a butter knife.

Baker’s note: I drag the knife through vertically in rows through the entire pan, then switch to horizontal dragging to complete the marbling. In some places I had to fold in the cheesecake layer a bit to more evenly distribute it.

4. Bake the brownies until edges are slightly puffed and center is just set, about 35 minutes. After removing them from the oven, let them cool for about 20 minutes and, if serving immediately, pop them in the freezer for another 10 minutes before slicing with a heated knife (run your knife under hot water for 30 seconds). This gives you a cleaner cut.

5. Refrigerate any left overs for up to one week.