San Francisco has a lot of amazing food.

It also has a lot of hills, which is really very convenient, because when you’re traveling on foot, those two things cancel each other out.

I just returned from a lovely vacation in San Francisco, and basically ate my way through the city. And walked up a lot of hills. And rode a lot of cable cars. Always hanging on the outside – because I’m a tourist. Obviously.

There was absolutely no way I was ever going to make the slightest dent in the San Francisco food scene in just 4 days, but here’s a rundown of what I ate, and where you can find it. Spoiler alert: It was all incredible.

For those of you who know me, or really anyone who has read this blog ever, it will come as no surprise that the majority of my pre-trip research revolved around exactly where we were going to eat.

I already had a food truck round up and a farmer’s market on our itinerary before I added things like the Golden Gate Bridge, but really. Priorities. Right? 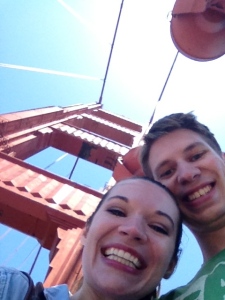 But as you can see, I still made time for a little sightseeing.

Our adventures in San Francisco started out strong with a Friday night trip to Off the Grid, local food truck gatherings spread across the city at different times during the week.

Friday night’s offerings are by far the biggest – there were over 20 food trucks and vendors in attendance, and each one was more tempting than the last.

We started out strong with a goat cheese, roasted red pepper, corn, and basil empanada from El Sur. The crust was flakey, yet strong enough to hold the gooey, tangy-sweet filling. It was the perfect hand-warmer for a chilly summer evening in San Francisco.

Next up were some incredible fish tacos from The Taco Guys. So delicious we quickly jumped back in like for seconds. While I usually prefer my fish tacos unbattered, these bites of fish were so delicately fried, they didn’t feel heavy in the slightest. Topped with pico de gallo, chipotle mayo, and pickled red onions they packed a huge flavor punch.

And you know I never pass up dessert. We sampled The Kentucky, a bourbon caramel and pecan topped freshly toasted creme brulee from The Creme Brulee Cart. Seriously, they have their own creme brulee cart in San Francisco. Now do you see why I was so excited? 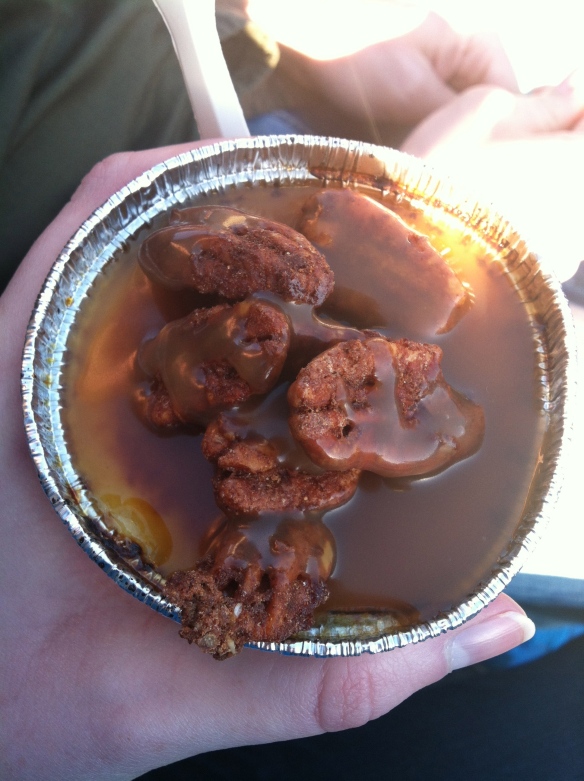 And seafood didn’t only make an appearance at our food truck stops. We had some delicious crab offerings at the cute (if touristy) Alioto’s on Fisherman’s Wharf. Between the crab sandwich on garlic sourdough bread, and the crab cake sliders, we were in seafood heaven. 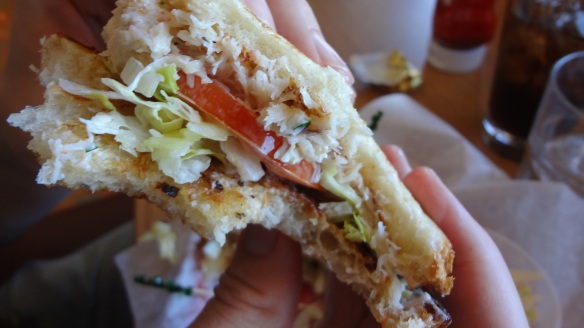 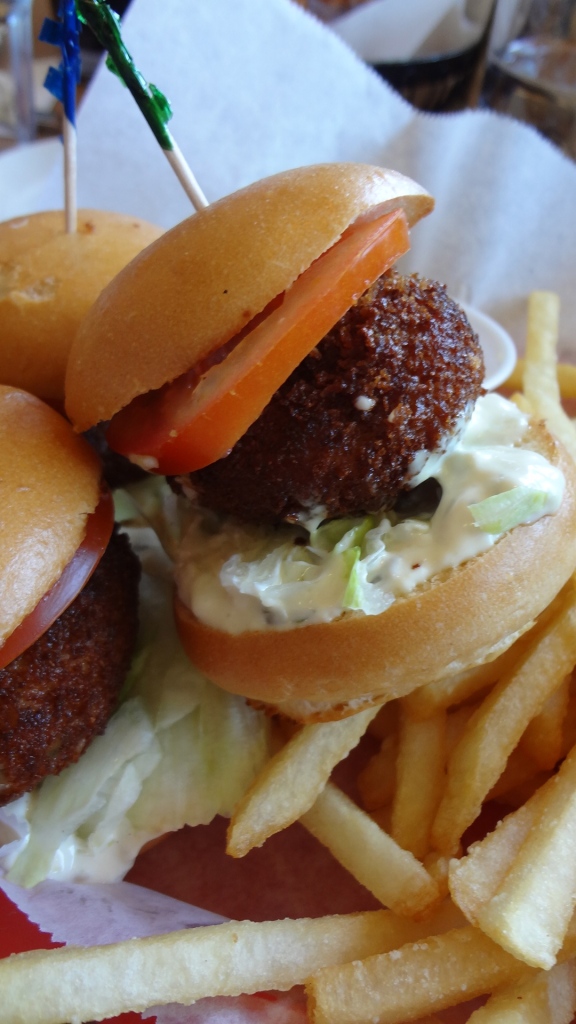 But it only got better from there. Saturday morning marks the week’s biggest farmer’s market at the Ferry Building – a magical place already loaded with adorable food shops and vendors that transforms into a foodie’s dream when the sidewalks and back patio are turned into an outdoor market.

The salmon BLT from Hayes Street Grill, followed by the amazingly moist yet flakey buttermilk biscuits from Biscuit Bender topped with Cowgirl Creamery’s smooth mascarpone and the freshest organic peaches I have ever tasted were the perfect picnic by the waterfront. 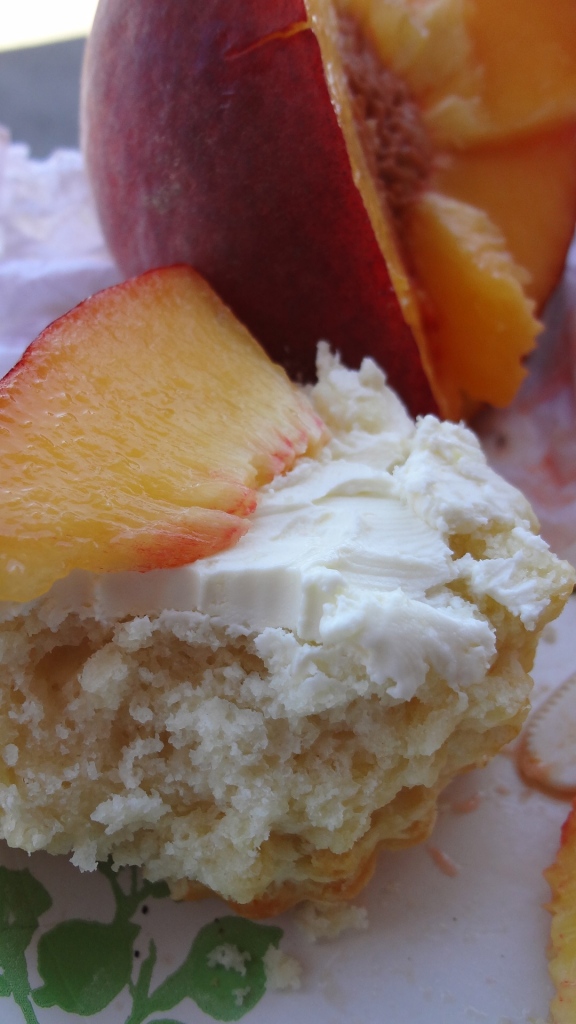 And when you finish things off with a strawberry rhubarb galette from Downtown Bakery & Creamery, it can’t really get much better, can it? 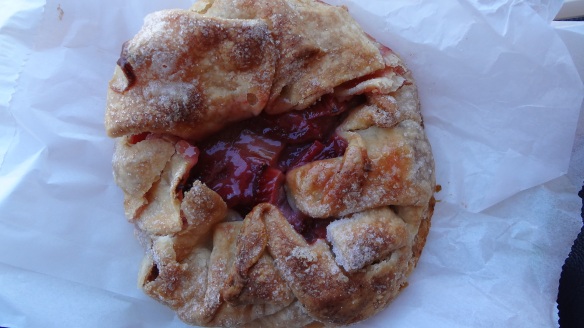 Except it did. Turns out the best was yet to come. After visiting Ghirardelli Square, and discovering one of their famed hot fudge sundaes ran for $10 (seriously? Even in San Francisco that’s crazy.) we ended up satisfying our afternoon sweet tooth at Kara’s Cupcakes. Best decision ever.

We sampled the chocolate velvet with it’s amazingly light mousse-like chocolate frosting  topping the decadent chocolate cake, seasonal key lime pie with its graham cracker crust bottom, tangy lime curd filling, and one of the best red velvet cakes I have found in their classic red velvet, I was hooked.

But even this, my darling readers, was not the highlight of my food-cation.

We stumbled upon that by accident, while touring the city on our super-touristy double decker bus, and hopped off, by happy coincidence, within a block of the International School of Pizza and the adjoining restaurant – Tony’s Pizza Neapoletana.

While an International School of Pizza sounds completely fabricated, the awe-inspiring pies offer more than enough credentials. The menu is loaded with pizza classified by how it’s cooked – fired by wood, coal, or gas – with a mind blowing array of flavor combinations, as well as the enticing classics.

We went for the simple New Yorker. A pizza topped with sausage, pepperoni, mozzarella, ricotta, and red sauce, cooked in a coal-fired oven with a chewy, slightly blacked crust.

There was no going back after that pizza. We ate almost the entire thing between the two of us (no small feat!), and have subsequently refused other opportunities to have pizza (even free pizza) because that was the best we had ever had.

Will I eat pizza again? Yes, that’s inevitable. But will it rock my tastebuds with the simple magic of that fateful day at Tony’s? Probably not.

Seriously, if you are in San Francisco, go to Tony’s. There will probably be a line. There was a line down the block before it even opened when we arrived, but I don’t care. Be late for whatever you need to be late for, and get yourself some pizza from Tony’s.

And then start saving, because you’ll be planning your next trip back to San Francisco just to get your hands on this pizza.

And to all my friends in San Francisco who are reading this…send me a slice?