I learned a really interesting thing about burgers this weekend.

Everyone disagrees on what perfection is.

I thought it was pretty simple – juicy meat, gooey cheese, some variety of toppings that taste good, and BAM – awesome burger.

But, no. Some people hate toppings. Some people love blue cheese. Some people want meat, bun, cheese, done. I tasted all that, and then some at this weekend’s first ever Twin Cities Burger Battle.

First off, while I have to point out that no burger battle (in my opinion) is ever complete without representation from the Blue Door and the Happy Gnome, I was amazed by the variety, and deliciousness, of burgers from places I had barely heard of.

Clearly I needed to broaden my horizons and educate myself. And where better to do that than at a burger battle?

If I had to sum up this even in three words, they would be: So. Much. Beef.

So much beef. 13 burgers in 3 hours. I only made it through 12. My trusty tasting companion made it through less than that (I blame his higher beer consumption), and even without tasting every single burger, I was averaging 4 burgers an hour. Insanity. Delicious insanity.

As with every first time event, there were ups and downs. For the most part, generally ups. Especially being something new a different. Here’s the quick and dirty version.

But what you really want to know about (I’m assuming, you are reading a food blog after all) is the burgers.

The people’s choice went to Golden Nugget, which I think surprised a lot of people, but their beef/ham combo with bone marrow mayo really set the tone with a nice, balanced flavor.

The official winner was B-52 and their spicy jalepeno burger. Definitely not my top choice as it was basically meat, cheese, and jalapenos with some really delicious fries on the side, but I get how people would like that.

I’m not going to describe all 12 burgers to you, but I will single out my top and bottom 3 for special recognition.

The Stilton Burger from Bulldog Lowertown 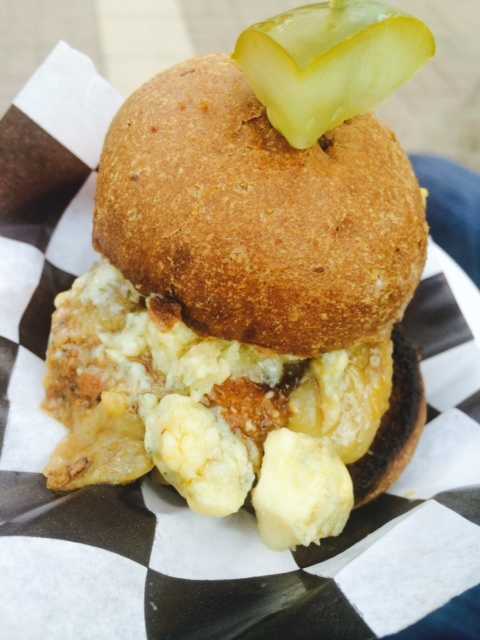 Sorry Bulldog, I just don’t like blue cheese. And the weird spicy crust on your burger wasn’t doing it for me.

It made me really sad that I didn’t like this one, because Red Cow has some amazing burgers. I think they really blew their shot at getting new customers with a bland, uninspired offering. The burger was dry, the chive sour cream had no flavor, and then they threw a few potato chips on top and called it a day. It was a letdown after some of the incredible offerings I’ve had in their restaurant.

Not happy deep fried, like State Fair deep fried, but sad deep fried like a quarter sized beef patty wrapped in a giant bun and deep fried so all you taste is batter and bun. And they somehow managed to make the actually burger part very dry. Which seems hard to do with a deep fryer.

I had never heard of My Burger before that day, but I will definitely be going back. Truffle aioli, juicy patty, cheese, bacon. I don’t even like bacon, and I liked this. It probably helped that I was starving and it was the first thing I ate. They also handed out samples of homemade ice cream later on, so that also scored them extra points. 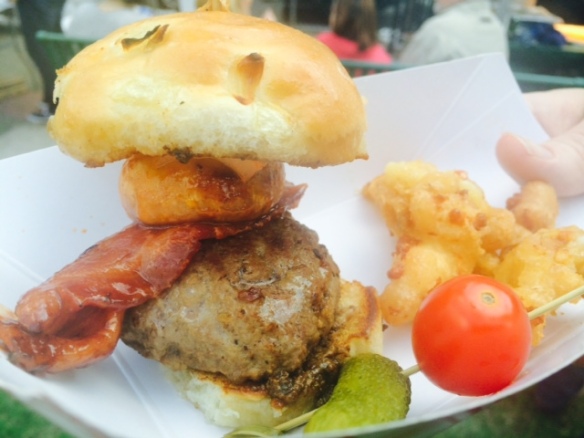 Points for unique concept/plating. Points for delicious, fresh veggies in a tasty sauce. Points for putting honey on your cheese curds. Genius. 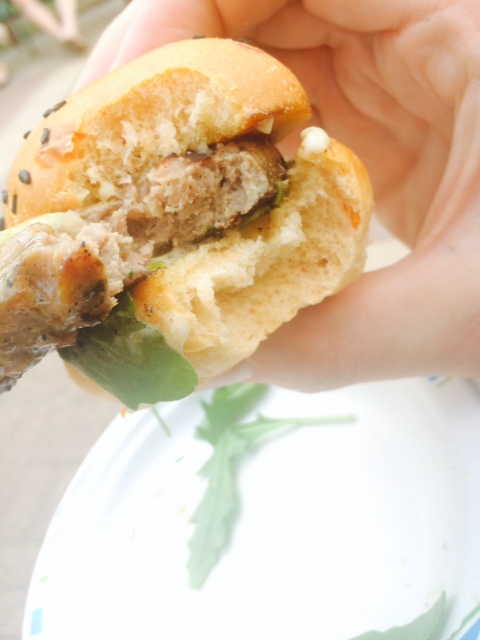 This burger made me wish I had skipped a few of the others, so I could keep eating it. I was far too full at that point, but it was a tasty offering from another place I had never heard of. I’ll be visiting there again soon.

So, were you at the Burger Battle? What was your favorite? What makes a perfect burger?