If you haven’t been to the Twin Cities Burger Battle, I highly recommend adding it to your to-do list for 2016. It’s a wonderfully planned event. For the crowds they draw, the wait time is relatively short for each burger, and I have yet to see anyone run out of food.

Last year, 13 burgers faced off. This year, they had an incredible 19. I only (only!) made it through 16 of the entries, so apologies for the less-than-100% review. If there’s someone out there who tasted the 3 I missed, please fill in the blanks!

Some tips on burger battling before we get to the entries:

1. Bring a friend. They say they are only giving you sliders, but they are the most generous sliders I have ever. Sharing one portion lets you get through as many as possible before you find yourself lying in a beef haze on the grass.

2. Take it easy on the beer. This year both Summit and Fulton were represented, but if you’re serious about the burgers, watch out for the filling beverages.

And now, on to the beef!

First up, and our personal favorite and People’s Choice Award Winner…

I think the St. Paul Grill made a smart decision grilling up full sized burgers (which are huge) and slicing them into quarters. There was no guessing on portion size or cook time, they stuck with what they knew how to do and executed well. The combination of sweet, salty, crispy, and a darn good pretzel bun made this burger the champion in my eyes.

This was a solid entry, but it didn’t have the complexity of flavor we were looking for in our champion. It was your basic bacon cheese burger. A blend of Ribeye, Hanger steak, sirloin and strip loin with white cheddar, housemade bacon, onions, and a pretzel bun.

Well cooked, juicy, but not loud enough to stand out in the crowd. That said, if it was your average Tuesday and I was looking for a good burger, I wouldn’t hesitate to visit The Salt Cellar.

The Happy Gnome – The Gnome Burger 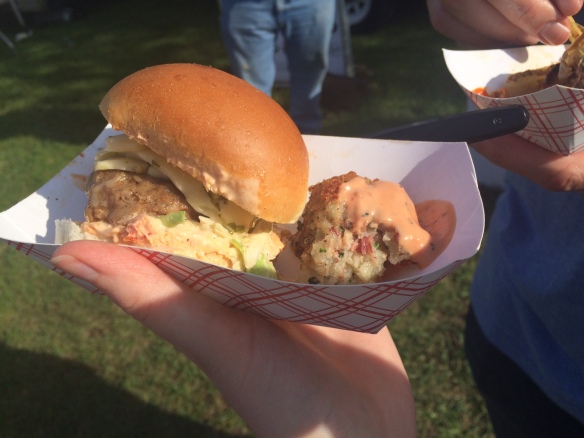 Now this guy was too heavy hitting on the other side of the flavor spectrum. I wanted to love this burger so much more than I did. I was cheering for the Happy Gnome from the beginning, I love their food, they always delight, and I wanted them to take home the gold.

They definitely wanted to stand out with their steak patty, horseradish havarti, sun-dried tomato cream cheese, and dill-sriracha slaw, but my tasting companion and I both agreed that while it had some of the most complex flavors of any burger in the battle, we weren’t sure the flavors actually went together. But huge effort points to my still beloved Happy Gnome. And if there was a competition going for best side, they would have taken home the trophy. That magical giant tater tot thing was amazing. I really hope I can order that in real life.

Pat’s Tap is a fun place, but this burger was underwhelming. It doesn’t help that I don’t like pickles, and this baby was topped with cheddar, heirloom tomato, and a garlic dill pickle. That could have made a difference for me here. It was decent, don’t get me wrong, but a little dry. The cheese was interesting texturally, and the bun had a surprising amount of flavor, but there was little else to make it stand out for me.

I really enjoyed burger. It was a mess to eat, but I thought the flavors were spot on. It featured grass fed beef, american cheese, chopped lettuce, picked green tomatoes, onions, and paddy sauce. For being that weird person who doesn’t like pickles, I do enjoy other foods that are pickled, so the green tomatoes added a nice tang. The sauce was sweet, the bun was soft, and the beef was well cooked. Probably my third favorite of the whole day, and was the judge’s choice for best burger.

Red Cow was another place I was pulling for. After a mediocre showing last year, I was hoping one of my favorite burger places would come out strong this year. But it was a big, hot mess. Actually, I can’t even say that because it was completely raw inside. A big moderately heated mess. Mushy pink goo covered in cheese and bacon. I supposed that’s a risk you take when you’re sampling from places that are cranking out thousands of burgers, but come on. If you’re going to show up to a burger battle, at least make sure you know how to cook a burger. My poor tasting companion was the first one to take a bite out of here, and I’d show you the after picture, but a big mushy lump of quickly spit out beef doesn’t look very appetizing. 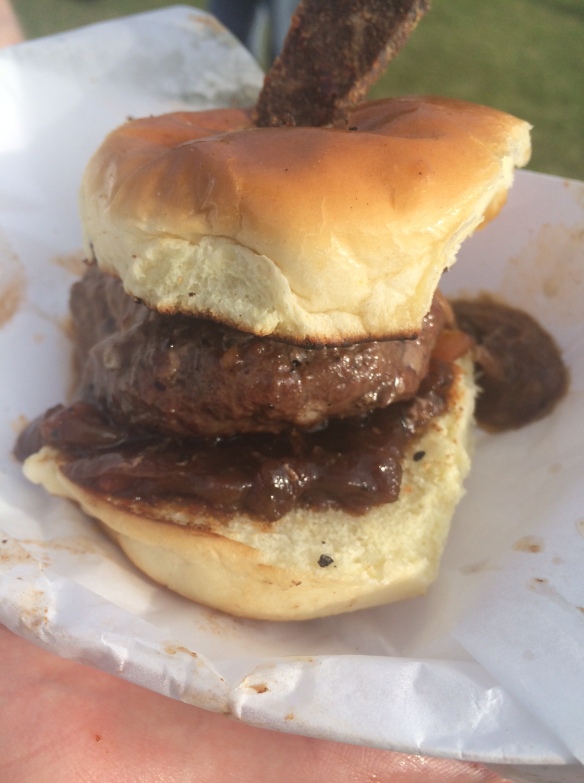 After rinsing our mouths out with alcohol to make sure we had killed any germs, we bravely soldiered on and were rewarded with my second favorite burger of the day. A very close second – this was the only one that held its own against the magic of St. Paul Grill.

I didn’t read the description before hopping in line, and it was a longer wait, so when I was finally mere feet from victory and I realized this baby had blue cheese on it, I started to panic. Had I shuffled along in line all this time just to have my delicate taste buds assaulted by blue cheese? Thankfully, Kyle convinced me to keep my place in line, and at least give it a try. His faith was rewarded with an incredible concoction of Peterson Farms Limousin beef stuffed with AmaBlu cheese, bacon marmalade and ox tail ragu. It was sweet, salty, and incredible. I have never been to FireLake Grill before, but if they can make me like blue cheese, they can expect to see me again very soon. 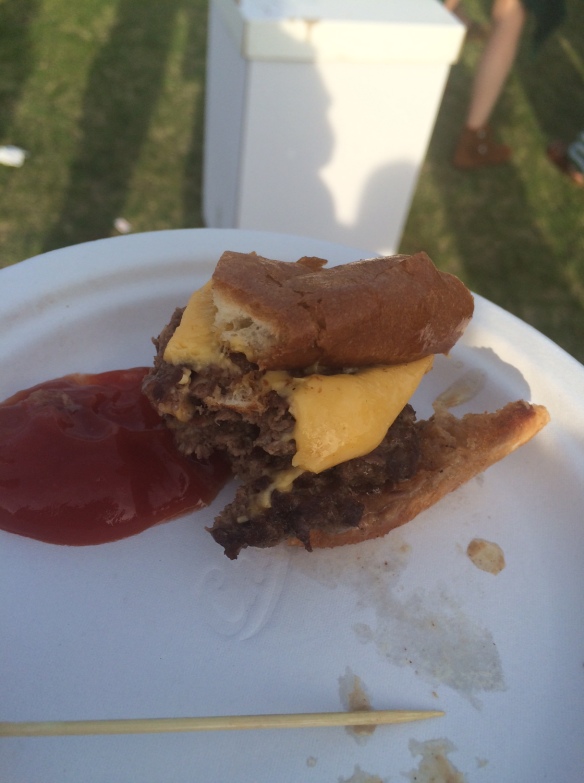 Apologies for the less than appetizing photo, I was actually halfway through my burger when I realized I hadn’t taken a picture yet. I have to applaud My Burger for their genius strategy. Deliver a good burger. There was nothing fancy here – a double patty, american cheese, a bun, some ketchup. But my goodness, do they know how to cook those patties. I was really pleased to see one of my favorites from last year back again, and taking a stand for the American classic.

Confession time. I’ve always wanted to try a burger with peanut butter on it. So when I saw this burger topped with melted cheddar, applewood smoked bacon, peanut butter, and pepper jelly, I got excited.

I know it’s the most horrible thing in the world you can do for yourself, and I’ve always been simultaneously intrigued and disgusted by the existence of peanut butter on a burger. Sort of like those celebrity dating shows they used to have on VH1, remember those? How many times did Bret Michaels try to find a lady?

So my time finally came. I could try a peanut butter burger with no shame and no commitment. I have to say, I was a little underwhelmed. It was ok, I liked the peanut butter, but the pepper jam was a little off for me. With the bacon and cheese it was just a bit much. If you’d taken away the bacon or the cheese, I think I would have liked it more.

Next up in the list of smart health decisions was the Dough-Dough burger – an all beef slider with sauteed onions, cheddar cheese, and bechamel sauce on a glazed donut bun. I had also heard of these mystical burgers sandwiched between donuts, but I hadn’t ever tried one for the same reasons as the peanut butter burger. And I am really glad I didn’t. The donuts were too artificially sweet to even be enjoyable, and with the salty burger and onions it was such an odd combo, we took one bite, made some weird faces, and were done and on to the next.

This burger was juicy lucy style, and surprisingly the only lucy in the bunch. It was stuffed with American cheese, bacon, and topped with ham and some sort of glaze. The whole thing was a bit too salty, not enough sweet to balance all the pigs going on. 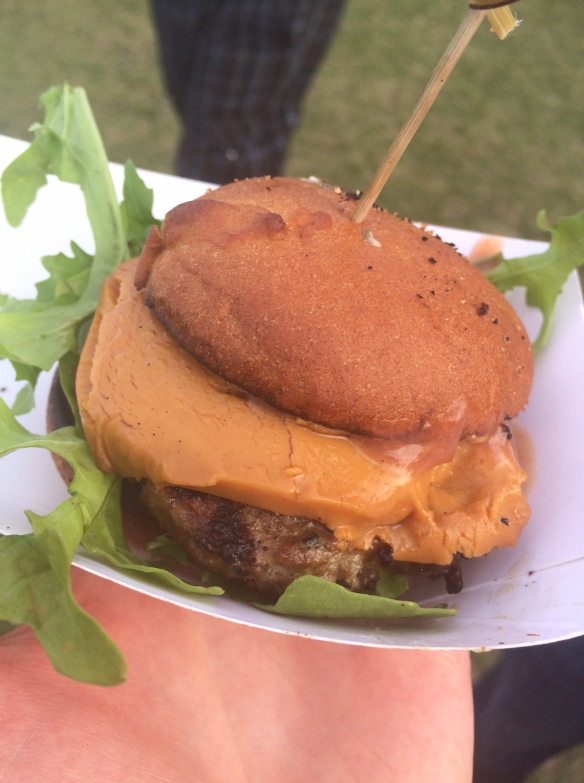 The Golden Nugget took home an award last year, and I had high hopes when I saw this bite featured caramelized onions, rhubarb ketchup, Gjetost cheese (Swedish goat cheese) with charred rosemary aioli, fresh arugula, and a Swedish Limpa bun. Vegetables (some of the only green we saw that wasn’t the grass underfoot) and mysterious Swedish cheese? Count me….out. This was an unpleasant creation. The cheese had the strangest gritty texture and slightly metallic flavor, the rhubarb ketchup had no flavor to speak of, and the pepper arugula didn’t help the balance. This was another one-bite wonder.

This was a refreshing burger. If you’re craving a burger, but it’s a hot summer day and you don’t want to feel heavy and sweaty, go with the CR7. The brioche bun, munster, pancetta, arugula, red onion, house pickles, and special sauce made for a crisp and juicy bite. I don’t think it had enough beef flavor to satisfy hardcore burger fans, but if you’re looking for a good lunch option, this would be it. 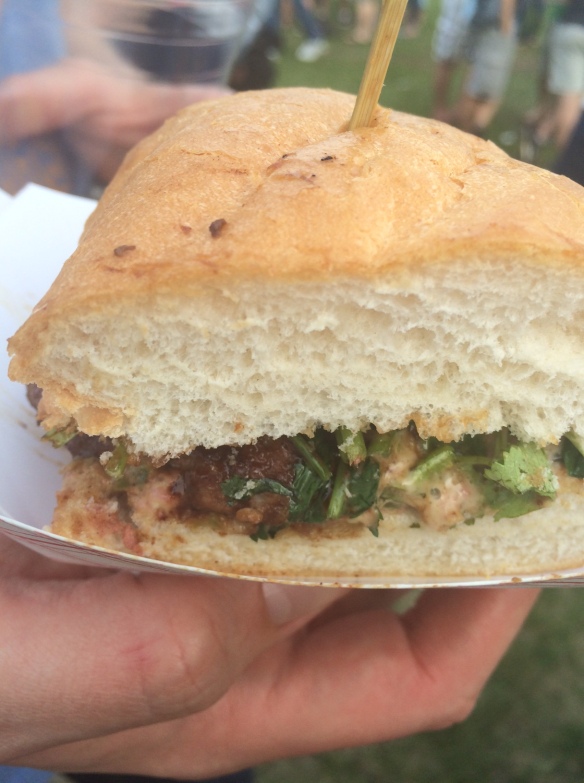 I enjoyed the Nook’s entry last year, but this one fell flat for me. I loved the creativity at play here, but the construction just didn’t deliver. Far too much cilantro overpowered everything else happening with the ground chuck and pork patty, hoisin sauce, beef pate, jalapenos, lightly picked cucumbers, daikon radish, red onions, and carrots on a french baguette. When you have all that on a burger, and all you can taste is cilantro, it’s time to reevaluate your priorities. Mix that with a subpar baguette, and it landed in my bottom three.

With a name like Peaches & Cream, you’re expecting something smooth, fruity, and juicy. A Peterson Farms Limousin beef burger on a milk bun with spicy caramelized onions, honey cured bacon, and brie cheese just didn’t live up to the name. Where were the peaches? This burger was pretty salty. No peaches. The best thing about it was the cheese curds. Which should be your main selling point at a burger battle.

I may have liked it more if they had a better name. I just had this idea in my head, and when I took a bite, it didn’t live up to my expectations. 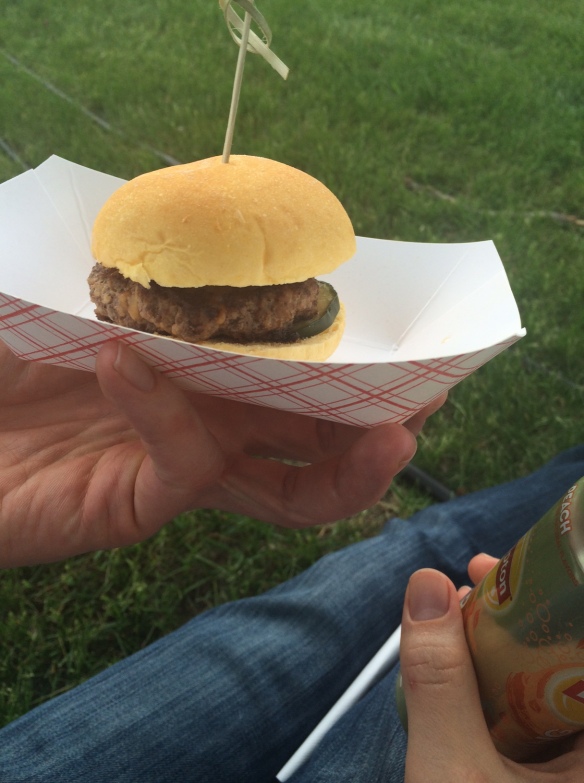 I found it odd that I enjoyed this very simple burger more than the previous Peaches & Cream, proving that good execution will win over fancy toppings any day. This little treat topped with molasses roasted pork belly, house made pickles (that I picked off), and a cilantro-lime aioli had a nice balance of sweet, salty, and tang. A good place to wrap up after a sunny evening of beef.